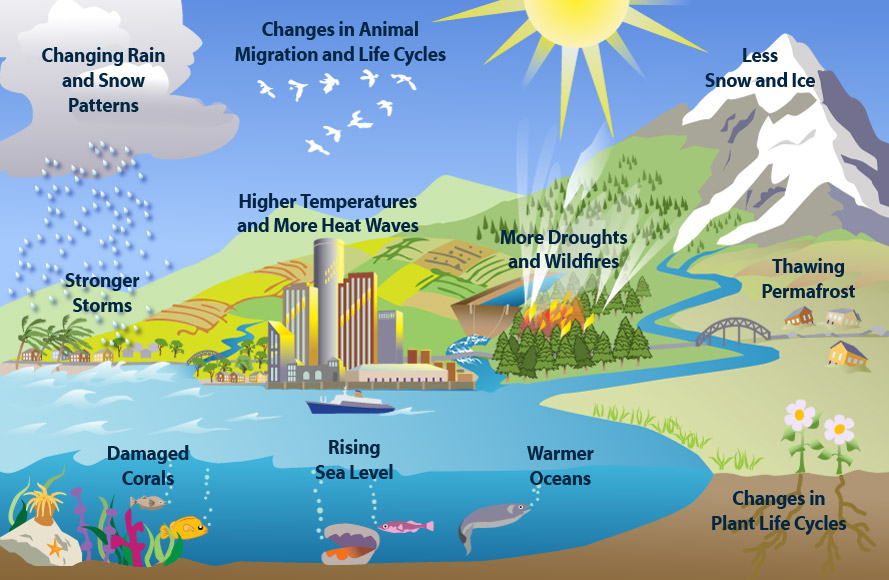 Last week the White House quietly released the federal government's Fourth National Climate Assessment. Their findings are profound: Earth’s climate is now changing faster than at any point in the history of modern civilization, with effects already being felt here in Rhode Island and around the globe. Emergency managers will play a critical role in our response to climate change. [Graphic: U.S. EPA]

On Black Friday, with a notable lack of fanfare, the White House quietly released the federal government’s Fourth National Climate Assessment (NCA4). This report, prepared every four years by Congressional mandate, represents the consensus of 13 federal agencies and more than 300 researchers. Their conclusions are alarming: “Earth’s climate is now changing faster than at any point in the history of modern civilization… The impacts of global climate change are already being felt in the United States and are projected to intensify in the future.” These findings come on the heels of an even more dire United Nations climate report released last month. Supported by more than 6,000 references, the UN’s exhaustive report finds that climate change is advancing far more rapidly than previously anticipated, with the potential of becoming a global crisis as soon as 2040.

Climate Change is the defining issue of our time and we are at a defining moment. From shifting weather patterns that threaten food production, to rising sea levels that increase the risk of catastrophic flooding, the impacts of climate change are global in scope and unprecedented in scale.

Absent significant global mitigation efforts, we should expect that “rising temperatures, sea level rise, and changes in extreme events are increasingly expected to increasingly disrupt and damage critical infrastructure and property, labor productivity, and vitality in our communities” according to the new federal report. For Rhode Island the result is already changing precipitation patterns, ecosystem and agricultural disruption, accelerated infrastructure deterioration, and adverse impacts to human health and well-being. All of us are susceptible to these changes, but our most vulnerable populations, including lower-income and other marginalized communities, have the least capacity to prepare for and cope with the effects of climate change.

2040 may seem far away compared to the relatively short planning cycles emergency managers usually follow. But we must adopt long-term strategies now to address climate change, because it’s going to play an increasing role for our profession over the coming decades.

Climate change is among the most politically contentious issues of our time. As emergency managers, it’s our duty to put aside the politics and gather the best intelligence we can. And in that regard, an overwhelming body of scientific evidence now indicates that our global climate is changing, most likely as a result of human activity during the past century.

Observations collected around the world provide significant, clear, and compelling evidence that global average temperature is much higher, and is rising more rapidly, than anything modern civilization has experienced, with widespread and growing impacts.

“Glaciers and snow cover are shrinking, and sea ice is retreating. Seas are warming, rising, and becoming more acidic, and marine species are moving to new locations toward cooler waters. Flooding is becoming more frequent along the U.S. coastline. Growing seasons are lengthening, and wildfires are increasing.” (NCA4) Once these were dire warnings for the future; now they are actually happening. There is no credible, peer-reviewed scientific work that refutes climate change, and every scientific observation tells us that recent observed trends will continue—and likely accelerate—over the course of the next century.

Climate change in a nutshell

Global climate change is a complex, interdisciplinary issue—impossible to fully explain in a single blog post. The elevator speech version: Heat is the engine that drives all weather on our planet, and even slight increases in average temperature can fuel extreme and unpredictable weather around the world. It doesn’t take much for this to happen; a global average temperature increase of only few degrees is enough to bring about significant changes on a planetary scale. The resulting weather impacts already include greater seasonal temperature extremes, increased intensity and frequency of extreme weather events, rising sea levels, and huge shifts in regional precipitation patterns. Even under the best scenarios, consequences will be profound for human health, critical infrastructure, agriculture and fishing, social services, the economy, and general quality of life in Rhode Island.

The majority of our critical infrastructure, agricultural systems, water resources, and even settlement patterns are based on past climate conditions and their natural range of vulnerability.

The assumption that current and future climate conditions will resemble the past is no longer valid.

Few communities have taken action to address the anticipated scale of future change and emergent threats. We need to start replacing our current models and standards with ones that integrate climate change projections into our existing investments, policies, and practices.

A key focus of the NCA4 is the relationship between different areas/disciplines affected by climate change. “The natural, built, and social systems we rely on are all interconnected, and impacts and management choices within one sector may have cascading effects on the others.” For example, increasing frequency and intensity of wildfires results in a higher incidence of landslides, especially when facilitated by greater rainfall intensity. These landslides can then disrupt transportation networks, impeding the flow of goods and services throughout the affected region and beyond. Ignoring the interconnected nature of climate change reduces our ability to adapt effectively to climate change, and increases the risk that adaptations in one sector will have worsen the impacts in other sectors.

What we can do

Climate change is a massive issue—on a scale almost unprecedented in recorded human history. Needless to say it extends well beyond the purview of the emergency manager. Yet emergency managers should be on the front lines of determining how our communities prepare for and adapt to the impacts of climate change. While many of us work with limited resources, and perhaps limited political capital, there is still a lot we can do to address the problem.

What do emergency managers need to know about climate change? Here are a few key points:

A call to action

Climate change is one of the greatest challenges ever faced by our global society. No armed conflict, no pandemic, no other event in history has approached the expected scale and widespread effects of global warming over the next century. Perhaps one of its most insidious aspects is that its slow approach makes it difficult difficult to even recognize the transition. But the scientific, observed evidence shows unequivocally that our weather systems are indeed changing as a result of global warming, and these changes are already having significant impacts on our communities; impacts that will only continue to worsen and expand over the next hundred years. As emergency managers we have both an opportunity and an obligation to start facing these challenges today. We cannot delay action, because climate change isn’t coming; it’s already here.

CLIMATE CHANGE RESOURCES
The EPA’s Climate Change: Resilience and Adaptation in New England (RAINE) site showcases New England communities taking action to adapt to the impacts of climate change in new and creative ways.
The University of Rhode Island’s STORMTOOLS is a web-based tool that illustrates and displays storm inundation, with and without sea level rise, for different types of storms that could occur along Rhode Island’s coast line.
NOAA’s Climate.gov provides timely and authoritative information about climate as well as tools and resources that help people make informed decisions about climate risks, vulnerability, and resilience.